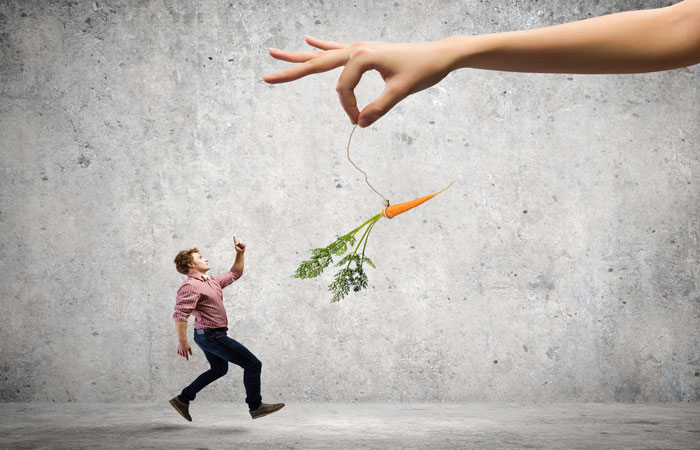 ​"When we think about labor, we usually think about motivation and payment as the same thing, but the reality is that we should probably add all kinds of things to it: meaning, creation, challenges, ownership, identity, pride, etc.”- Dan Ariely

Professor of Psychology and Behavioural Economist, Dan Ariely has spent years researching what motivates and demotivates people. His research shows that when it comes to motivation, it's not all about money. Money is certainly important - people need to be paid well - but money alone is not reward enough. Ariely argues that most of us don’t really understand our own motivation, or accurately comprehend what makes us or our employees happy in the workplace.

He demonstrates this through multiple experiments, some of which highlight ways to destroy motivation.

In one experiment, people were split into two groups and asked to build lego robots. Group one had their first robot dismantled in front of them while they built a second robot. They experienced an endless loop of building and having their robots destroyed. Group two had their robots destroyed out of sight. In the first condition - where the robots were destroyed in front of participants - people would stop building very quickly. But in the more meaningful condition, where the lego wasn't dismantled in front of people, participants continued building for longer. This was true irrespective of whether participants genuinely liked building lego.

Essentially, by crushing people's efforts, you likely destroy any joy they receive. Like Sisyphus – condemned by the Greek gods to endlessly roll a boulder up a hill, only to have it roll down again, over and over – this experiment captures the essence of futility, of never getting to the top and having to do the same thing over and over.

So how can this materialise in the workplace? Say you were in management and had a team of employees working on a specific project, and you then changed direction on them. This may be viewed by management as unavoidable in the workplace, but we don’t realise how demotivating it can be.

In a second experiment, researchers gave participants a piece of paper with random letters. Their job was to find 12 letters that were the same. If they finished the paper, they could do a second, a third and so on. In the first condition, participants were asked to write their name on the paper and give it to an experimenter who scanned the paper with their eyes, put it on a pile and asked them if they'd like another. In the second condition, people didn't write their names. The researcher took their paper without looking at it, put it on a pile, and asked if they'd like another. In the third condition, the researcher simply shred the paper.

The results? Those in the first condition worked for longer. People in the third condition, whose paper had been shredded, stopped working much earlier. The second condition - where the researcher didn't look at the paper – clearly wasn't as bad as the shredder condition, but it wasn't as rewarding as condition one. The performance of these people was almost as bad as those who had their work destroyed in front of them.

So essentially, a lack of recognition is almost as bad as destroying someone's efforts entirely. Lack of acknowledgment has a significant effect on motivation. Employers need to give people a sense of creation, contribution and ownership for their work.

By paying people a money bonus one day, Intel increased productivity on that day, but decreased it so much the following few days they lost five per cent productivity in total. The mentality behind this was that yesterday employees were paid well, so they were interested. Today they were not.

This result has been replicated in other experiments by Ariely. One experiment involved asking people on the street if they would help unload a sofa. People were willing to help when offered nothing for their assistance, and were equally willing to help when offered a small gift, but were mostly unwilling to assist when money was offered. Ultimately, people are happy to work for free, or for a gift, but offer them even a small payment, and they will keep walking.

Ariely argues that it's important to treat employees in a way that recognises and respects long-term commitment.

“Although some companies have been successful in creating social norms with their workers, the current obsession with short-term profits, outsourcing, and draconian cost cutting threatens to undermine it all. In a social exchange, after all, people believe that if something goes awry the other party will be there for them, to protect and help them.”

People need to see they are contributing to something, and it's vital employees experience a sense of accomplishment, recognition, ownership and purpose.

“It's remarkable how much work companies (particularly start-ups) can get out of people when social norms (such as the excitement of building something together) are stronger than market norms (such as salaries stepping up with each promotion).”